USS John C. Stennis (CVN-74) is the seventh Nimitz-class nuclear-powered supercarrier in the United States Navy, named for Senator John C. Stennis of Mississippi. She was commissioned on 9 December 1995. Her home port is Bremerton, Washington.

The air wing can engage enemy aircraft, submarines, and land targets, or lay mines hundreds of miles from the ship. John C. Stennis‘s aircraft are used to conduct strikes, support land battles, protect the battle group or other friendly shipping, and implement a sea or air blockade. The air wing provides a visible presence to demonstrate American power and resolve in a crisis. The ship normally operates as the centerpiece of a carrier battle group commanded by a flag officer embarked upon John C. Stennis and consisting of four to six other ships.

John C. Stennis‘s two nuclear reactors give her virtually unlimited range and endurance and a top speed in excess of 30 knots (56 km/h, 34.5 mph). The ship’s four catapults and four arresting gear engines enable her to launch and recover aircraft rapidly and simultaneously. The ship carries approximately 3 million US gallons (11,000 m3) of fuel for her aircraft and escorts, and enough weapons and stores for extended operations without replenishment. John C. Stennis also has extensive repair capabilities, including a fully equipped Aircraft Intermediate Maintenance Department, a micro-miniature electronics repair shop, and numerous ship repair shops.

The nuclear-powered USS John C. Stennis (CVN 74) was contracted on 29 March 1988, and the keel was laid on 13 March 1991 at Newport News Shipbuilding, Newport News, Virginia.

The ship was christened on 11 November 1993, in honor of Senator John Cornelius Stennis (D-Mississippi) who served in the Senate from 1947 to 1989. The daughter of the ship’s namesake, Mrs. Margaret Stennis-Womble, was the ship’s sponsor. John C. Stennis was commissioned on 9 December 1995 at Naval Station Norfolk, Va, and she conducted flight deck certification in January 1996. The first arrested landing was by a VX-23 F-14B. The ship conducted numerous carrier qualifications and independent steaming exercises off the East Coast throughout the next two years. Included among these events was the first carrier landing of an F/A-18E/F Super Hornet on 18 January 1997.

In October 1998, she entered a six-month maintenance and upgrade period at North Island, returning to sea in April 1999. During the maintenance period, a jet blast deflector collapsed, severely injuring two sailors.

On 30 November 1999, the ship ran aground in a shallow area adjacent to the turning basin near North Island. Silt clogged the intake pipes to the steam condensing systems for the nuclear reactor plants, causing the carrier’s two nuclear reactors to be shut down (one reactor by crew, the other automatically) for a period of 45 minutes. She was towed back to her pier for maintenance and observation for the next two days. The cleanup cost was about $2 million.

On 7 January 2000, John C. Stennis deployed to the Persian Gulf to relieve USS John F. Kennedy in Operation Southern Watch. During the deployment, the ship made port visits to South Korea, Hong Kong, Malaysia, Bahrain, the United Arab Emirates and Australia, and Pearl Harbor, before returning to San Diego on 3 July 2000.

On 12 November 2001, two months earlier than scheduled, the ship left on her third deployment to the U.S. Fifth Fleet area of responsibility in support of Operation Enduring Freedom, returning to San Diego on 28 May 2002. From June 2002 to January 2003, JCS underwent a seven-month Planned Incremental Availability (PIA).

From 24 May to 1 November 2004, John C. Stennis conducted her fourth major overseas deployment, participating in Exercise Northern Edge 2004 in the Gulf of Alaska, Rim of the Pacific (RimPac) Exercise off Hawaii, exercises with Kitty Hawk off Japan and goodwill visits to Japan, Malaysia and Western Australia. Shortly after returning from deployment to San Diego, JCS changed her home port to Naval Station Bremerton, Washington on 19 January 2005. Once at Bremerton, John C. Stennis underwent an 11-month docking planned incremental availability (DPIA), the first time she had been dry-docked since commissioning. Upgrades included a new mast. The new mast’s structure is the first of its kind. A new type of steel alloy was used, making it stiffer and thicker than before. The new mast is also heavier and taller, allowing it to support new antennae the old mast would not have been able to support. Other upgrades included the installation of a new integrated bridge system in the pilothouse that will save manpower and provide state-of-the-art displays.[4][5][6][7]

Following the maintenance cycle and pre-deployment training exercises, the carrier returned to Bremerton, Washington, and the carrier was certified surge ready, meaning the ship maintained a high state of readiness in case of an unscheduled deployment.[8] 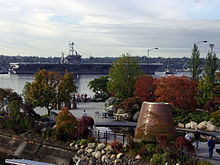 On 20 January 2007, the carrier and her group set sail for the Persian Gulf as part of an increase in US military presence. John C. Stennis arrived in the area on 19 February 2007, joining USS Dwight D. Eisenhower in the United States Fifth Fleet area of operations.[9] This marked the first time since 2003 that there were two aircraft carrier battle groups in the region simultaneously.

On 23 May 2007, John C. Stennis, along with eight other warships including the aircraft carrier Nimitz and amphibious assault ship Bonhomme Richard, passed through the Strait of Hormuz. US Navy officials said it was the largest such move since 2003.[10]

John C. Stennis departed Bremerton for a 6-month deployment to the western Pacific on 13 January 2009. On 24 April, the ship arrived in Singapore. That same day, one of the ship’s sailors was crushed and killed while working from a small harbor boat to secure a drain that discharges oily water from the aircraft catapults.[11]

On 29 April, the ship’s executive officer, Commander David L. Burnham, was relieved by Rear Admiral Mark A. Vance over unspecified personal conduct. Burnham was reassigned to a base in San Diego, pending an investigation.[12]

After participating in exercises with Japan Maritime Self Defense Force and the Republic of Korea, as well as joint exercise Northern Edge 2009, John C. Stennis returned from deployment in early July 2009. Carrier Air Wing 9 debarked on 6 July at NAS North Island,[13]prior to the ship’s arrival at her homeport of Bremerton on 10 July.[14] 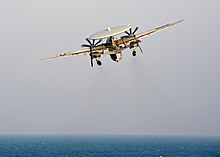 On 30 March 2011, a VMFAT-101 F/A-18C Hornet suffered an uncontained catastrophic engine failure, exploded and caught fire just before launch from John C. Stennis about 100 miles (160 km) off the coast of San Diego during launch and recovery training operations. The aircraft was at full power, in tension on the catapult when the accident occurred. Eleven flight deck crewmen were injured while the pilot was unhurt. There was no major damage to the carrier but the aircraft was a total loss.[15]

On 18 December 2011, the final command-and-control mission for U.S. forces over Iraq was flown by an E-2C Hawkeye (pictured) from Carrier Airborne Early Warning Squadron 112 (VAW-112), catapulting off the carrier John C. Stennis at 7:32 am and returning at 11:04 a.m, both local time. This mission effectively ended U.S. naval support for Operation New Dawn.[16]

On 3 January 2012, Iranian General Ataollah Salehi warned John C. Stennis “not to return to the Persian Gulf.”[17] The United States dismissed the warning.[18]

On 7 January, John C. Stennis led the rescue of an Iranian-flagged fishing vessel, Al Mulahi, following its seizure by pirates. The pirates ambushed the ship and Iranian flag to search for other ships to hijack, while holding the original crew hostage. When some of the pirates attempted to board a Bahamian-flagged cargo ship, Sunshine, it radioed for assistance. John C. Stennis dispatched a helicopter and cruiser to assist. A boarding party captured the pirates who attacked Sunshine, fed them, then released them temporarily. A helicopter then secretly followed the pirates back to their mother ship, Al Mulahi. Crew from the destroyer USS Kidd then boarded the fishing vessel (upon permission in Urdu from the captain), and arrested all of the pirates with no casualties.[19]

On 7 July 2012, crew members were informed that John C. Stennis would be returning to the Middle East in August, much sooner than expected.[20][21]

On 27 August 2012, John C. Stennis departed to the Middle East originally for six months, but was extended to eight.[22]

On 1 April 2013, the ship arrived at Changi Naval Base in Singapore. Local ITE students were invited for a guided tour inside the aircraft carrier.[23]

Following that the ship sailed to Pearl Harbor, where it performed a week long tiger cruise to San Diego [24]

At 12:45 on 3 May 2013, John C. Stennis arrived at its home port of Naval Base Kitsap in Bremerton, Washington, the completion of an eight-month, 66,000 miles (106,000 km) deployment to the western Pacific Ocean. During this deployment, squadron aircraft flew more than 1,300 sorties from the carrier’s deck in the war in Afghanistan.[25]

In mid-January 2015, John C. Stennis departed its home port of Naval Base Kitsap in Bremerton, Washington, and arrived at Naval Magazine Indian Island to load munitions prior to departing for San Diego to receive aircraft and another 2,000 sailors.[26] On 1 September, the carrier arrived back at Bremerton, Washington.

On 15 January 2016, John C. Stennis left Naval Base Kitsap for a scheduled deployment to the Western Pacific.[27] On 19 April she arrived to Singapore for a regularly scheduled port visit after completing an annual bilateral training exercise in the Philippines.[28] On 26 April 2016, China denied John C. Stennis permission to make a port visit to Hong Kong as well as its escort ships.[29] On 10 August, the carrier arrived back at San Diego, California.

USS John C. Stennis (CVN 74) is the seventh Nimitz-class nuclear-powered supercarrier in the United States Navy, named for Senator John C. Stennis of Mississippi. She was commissioned on 9 December 1995. Her home port is Bremerton, Washington.

Looking for other Supercarriers? Check those pages!